Synology: Networkload based automatic DSM shutdown via script with Tux

Have you ever had the problem you want your Synology NAS to be powered off automatically when it's not in use but you did not set up an automated shutdown cycle because of you could not be sure whether there are still some network related jobs up and running?

This tutorial is not for everyone! It is basically for people who want their NAS being turned off to save power when it is not in use over network.

Be aware that using this script is not recommended in case you are using your Synology NAS' any other physical data interface than LAN (e.g. USB, eSATA, …) because all other physical data interfaces than LAN will be ignored by this script and therefore the Synology NAS will shutdown even if you have a running service over physical non-LAN interfaces! In addition, keep in mind, that lots of startup/shutdown cycles can effect the lifetime of your Synology NAS, including the data drives. YOU HAVE BEEN WARNED!

Please note that in this tutorial the sshpass-plugin for unattended user/password authentication is being used as in my case the script is only being used on secure home environment. Do NOT use this method in production environmant due to security risks! In this case you should use the SSH certificate authentication mode instead! In this case please look out for the two following script code lines containing the sshpass-command and just do the according following small one-line modification on both of the lines:

Unfortunately there is no advanced SNMP-client on the Synology NAS pre-installed but only an SNMP-server. This means you cannot run the script on DSM localhost (127.0.0.1) unless you'll find an SNMP-client package for DSM to install. That said, it is necessary to put the script onto a remote Linux system (Ubuntu 18.04 server-VM on VMware ESXi-host in my case) which on the other hand keeps your Synology NAS save from ending in a shutdown loop in case of script misconfiguration. Of course you could also place an Ubuntu-VM onto the Synology NAS itself when using Synology's Virtual Machine Manager, this would make some code lines inside the script unnecessary (e.g. PING commands) but would work anyway, so feel free to adjust the script if you want or leave it untouched in any case, it does not affect the script's functionality.

This tutorial is based on the following two systems which was tested successfully according to its functionality:

On Synology:
Enable SSH and SNMP service on the Synology NAS (Control panel → Terminal & SNMP) and on SNMP settings give it a meaningful custom community name (for example your Synology's hostname) which later has to match the according script variable value. You also have to enable SNMPv1, SNMPv2c service. Also make sure your Synology NAS' firewall rules are set up to allow incoming SSH traffic (port 22) SNMP traffic (port 161) and ICMP (PING) traffic! 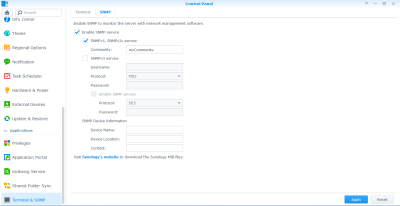 Enable SNMP service on Synology and add a community name 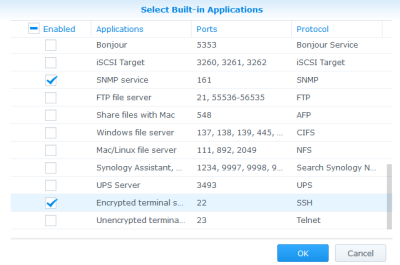 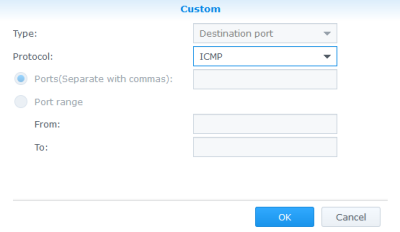 
Now make sure that the root user on your Synology NAS has permissions to login directly. To accomplish this, please follow this tutorial.

On your Linux client install the SNMP-client:

Optional: On your Linux client download and install the sshpass package:

Now, before go closer to the implementation, it is important to know about best practice on how to start the first time with this script: First of all, like already mentioned, you already had to decide whether it makes sense for you to use the script at all because it is network traffic dependent only. This basically means, when a specific amount of data is not being transferred over the Synology NAS' network ports over a specific amount of time, you can reliably assume that the Synology NAS is not in use (which you could not when using any other physical data interface other than LAN). As in my case, all my interactions with my Synology NAS are always heavy network traffic dependent (automated weekly backup jobs, copying large/a lot of files over SMB/NFS, media server, and so on…) and I want to have my Synology NAS powered off when none of those jobs are running. So this script is exactly what I want to have because it lets me automate the Synology NAS' power control completely. So now, if you are willing to use the script too (which I assume you do when you've reached over here), you have to decide how long you want to have your Synology NAS running idle before it shuts down automatically. To give you an idea, in my case, I took one hour (for the script that would be a value of 3600 seconds) and a shutdown-limit of 500 MB (for the script that would be a value of 500000000 Bytes) for every single of the Synology NAS' network interfaces.

This means: If the amount of data being transferred over any of the Synology NAS' network ports does not exceed 500 MB within one hour, the Synology NAS is going to shutdown.

For your specific case you have to decide two things:

File logging option. Change the value to "y" to activate file logging and don't foregt to set it back after your testing phase has finished!

Note: You can even do a log history cycle over night or even a few days if you want because I've implemented a counter which will increase after every loop pass. This counter value is also being added to the filename(s) being created, just study the script a little bit and you'll find out what it does if you are interested in it.

Now there are a few more things to mention:

You may think that I was doing it too granular when getting SNMP values twice for every of my four network interfaces and even differentiate incoming and outgoing traffic. Of course you could also add up all values together twice and then do a single substraction but when you leave the script almost untouched and use it like I did you will be more flexible if, for example, you would want to exclude a specific network interface from being monitored for whatever reason.

Now, let's stop messing around and just start with the script!

First, according to official Synology MIB documents, to find out the specific SNMP-OID and the according network interface name per network interface, from an SNMP client Linux system, execute the following command (for <mySNMPCommunity> set the community name value as configured recently):

After configuring all of the script's parameters according to your requirements you have to put the script onto your Linux SNMP-client system. Then make the script executable:

Then run the script manually to do all required testings to figure out your specific settings for later automation.

After those testings you should have figured out the matching script values for your personal requirements. So after configuring the script according to your requirements open the crontab editor on your Linux SNMP-client system:

Now, to make the script run automatically on system reboot, which would be best practice in most cases, just insert the following line to the crontab file to add the specific cronjob:

…or alternatively, if you want to log the script's output (stdout and stderr) into a file permanently (the logfile will be deleted after every system reboot when it is saved into the /tmp directory, you have to put it into another path (e.g. /home/<myUser>) if you don't want it to be deleted on reboot):

Now save it and quit the crontab editor.

This way the script will start automatically everytime you reboot your Linux SNMP-client system and your networkload based Synology NAS shutdown script has successfully been set up.

Except where otherwise noted, content on this wiki is licensed under the following license: CC Attribution-Noncommercial-Share Alike 4.0 International